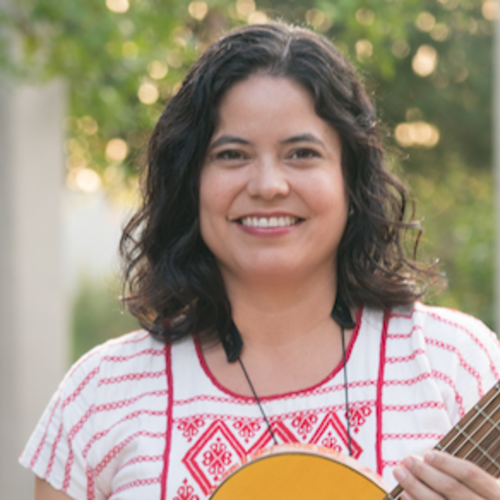 Mary Alfaro Velasco is a guitarist, singer, and multi-instrumentalist born and raised in San Fernando, California. She began playing classical guitar and ranchera music in her early college years and earned a B.A. in Music at UCLA in 2009 along with a teaching credential in K-12 Music. She has performed in various mariachi and trío romántico ensembles throughout Los Angeles and in several television and professional theater productions in LA and at the Oregon Shakespeare Festival.

Mary Alfaro Velasco performs diverse musical styles from the Americas and utilizes a queer feminist approach to reinterpret classic boleros, rancheras, and other song forms. Most recently, she has taken up the requinto romántico, a soprano melodic guitar used in bolero music.

She holds an M.A. in Latin American Studies from UCLA and has worked on projects to promote and preserve Latinx musical traditions at Smithsonian Folkways Recordings, the Smithsonian Center for Folklife and Cultural Heritage, the Library of Congress Archive of Folk Culture, and at LA Plaza de Cultura y Artes. In addition to performing several days a week throughout Los Angeles, she is involved in museum work and teaches guitar at a state prison in California through a program managed by the Alliance for California Traditional Arts.